Social media empowers consumers to be recognized by marketers as human again, their voices amplified through an expanding array of platforms in the transparent online marketplace.  Businesses are learning the value of this increasing amount of unsolicited market data, as well as the power of engaging their customers in conversation.  As a result, products and services are being tailored to customers more efficiently, and businesses are able to respond quicker to issues and concerns.

How are these changes affecting web design?  In order to fully leverage the benefits of this new relationship between business and consumer, websites must be designed with and for the ‘social Web’, affecting aesthetics, functionality, and the development process itself.

In 2009, Verne Ho of Toronto digital agency Jet Cooper, blogged an article called Applications of Usability Principles in a Social Network, which outlined how the design of regular websites and social networks differs.  He included these three points that exclusively apply to social network design:

A Jess3 presentation, ’10 Ways Social Media is Changing The Way We Think About [The] Web / Design’, implies that these very principles are making their way into web design in the form of built-in or linked social media “building blocks.”  These features allow businesses to solicit real-time feedback from their target market, and build more intimate relationships, while increasing their overall web presence.

An example of this social media integration is seen in Vancouver newspaper The Georgia Straight’s website, which has multiple social media building blocks, giving visitors ample opportunity to spread articles they enjoy throughout their social networks, while providing the publication with immediate data about which articles are more popular than others.

Additionally, Jess3 cites the New York Times YouTube page as an example of corporate site design built within social media framework, which is a service that many web designers are including in their arsenal, and even making their exclusive offering.

Social media’s influence on web design is also evident in game design, which Wylie Styles, Presentation Art Designer at Ubisoft Toronto, says “is essentially complex web design.” He added: “Design logic is coming straight from the user now.  A really well done site is a two-way conversation. Game development is now taking cues from Facebook, from the consumer.  It’s not like ‘here, it’s done’ anymore. Users add to and evolve with the game.”

Styles said that new game designs will take cues from the popularity of social games like FarmVille on Facebook, which surpassed the 80-million-player mark in February 2010 (AppData).

“Based on the huge popularity of these social media-based games, new games are not only being built for Facebook, but they’re also incorporating social media style interaction, where players choose how they want to play the game, and pay for game elements they want to use, rather than a $60 shot for a finished game that doesn’t adapt to their gaming style,” he said.

“As our business evolves from mostly packaged goods — games on a disc — to an online experience/subscription model, the look and feel of the customer interface becomes increasingly critical to the success of our products,” said Macrae. “Much of our online content is accessed through a website, so it’s very important that the site is content rich, appealing, and well designed to draw our customers into the online gaming experience and keep them coming back.”

He has also witnessed social media’s influence on the evolution of game design.  “Social media has become a big driver of growth in video games, as customers access our products through sites like Facebook, among others,” he explained. “By nature, these games are constantly evolving and changing, based on our ability to gather significant amounts of telemetry and data through the two-way relationship created by social gaming, and then change and enhance the game based on that feedback.

“In the past, console titles — like Madden NFL, for instance — were updated once a year,” added Macrae. “In the case of online social gaming, the games are updated virtually in real time.”

The Medium Is The Message

Is web design also becoming a more interactive process? Jess3’s presentation gives examples of how design prototypes are now being released on Flickr and Twitpic to solicit feedback from design peers and target markets, adding that there are less ‘red curtain launches’ after largely closed-door, small sample testing, resulting in a more public, interactive, and continuous development process, not only with web design, but design in general.

An example of the increasingly public development process can be seen in the recent re-design of Vancouver’s online-only Granville Magazine.  The changes were announced via newsletter, where the editor asked subscribers to provide feedback and suggestions on how to improve the new design before its official launch. 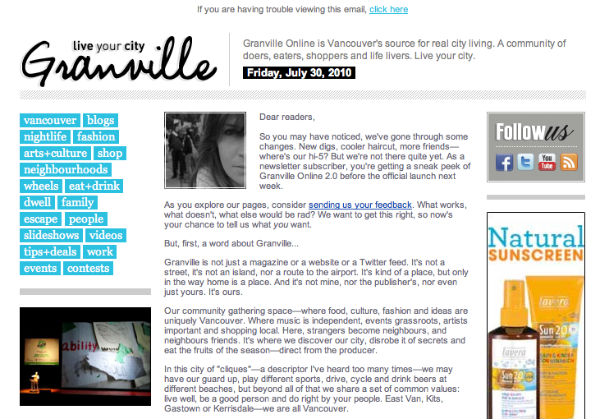 Will we see more of this in the future?  Will web design become a more ongoing process, rather than merely development, testing, and launching?  If so, this could mean more involved, long-term relationships between businesses and their designers.

How has social media influenced aesthetic trends in web design?  Aside from the added social media building blocks and designing within social media frameworks, another noticeable trait shared by social networks is aesthetic simplicity.  This can be attributed to their main focus on usability, resulting in little room for elaborate visuals.

“The minimal web design we are seeing so much of these days in so many web designer portfolios is a product of the popularity of blogging and microblogging sites,” said Wylie.  He cites the new www.cargocollective.com as an example of a network that allows people to showcase their creative portfolios on a customizable CMS template, resulting in very similar layouts that highlight the featured work, rather than the site design itself.  The site also acts as a social network where members can be updated when people they follow release new work.

An example of similarly simplistic design can be seen on social network sites like Twitter and Tumblr.   There’s also been widespread abandonment of features like elaborate Flash intros, which are unpopular for a variety of reasons aside from their time-wasting factor.

Kerry Morrison, Digital Marketing Consultant at ReasonID, has watched as businesses were initially skeptical, but have become increasingly aware of the need to embrace social media as part of their marketing efforts.  How does he think social media has influenced design?

“I suppose the simplification in accessing social media related sites — Twitter, Facebook, Yelp, Gowalla, and so on — is in some way affecting design.  It’s stripping away some of the superfluous, but in doing so it’s adding new layers we’d not considered before. Never before has it been possible to access so much data and in such a simple form. And never before have we seen such levels of interactivity, such an array of experiences and immersive environments.”

Regardless of how simplistic the aesthetics of web design may become, web designers must remain creative in a world where they’re inundated with constant feedback on their work.

However, not everyone’s opinion carries equal weight in terms of best web design practices.  Designers will be required to interpret this rapidly increasing amount of feedback into functional, aesthetically pleasing websites that now, more than ever, need to reflect the desires and behaviours of the end-user.

The new challenge is to take this feedback and turn it into innovations in interactivity that further capitalize on this increasingly symbiotic relationship between the business, designer and user. Those who encourage, listen to, and leverage this feedback will likely be leaders on the Web for the foreseeable future.