Website visitors are demanding fast-loading sites, just like they did in the 90s. But are they getting it? Despite faster Internet connections, users complain websites are still too slow, suggest tests conducted by usability specialist Jakob Nielsen.

The culprits, which used to be large images and Flash intros, are now fancy page widgets. Just try going to social media site Digg to get a taste for yourself.

According to Nielsen, speed matters for two reasons:

Nielsen insists a “snappy” user experience beats a “glamorous” one because people engage more with a website when they can move freely and focus on the content instead of on the wait.

Webcopyplus’ own studies support this theory. For instance, in a 2009 online poll, more than 50% of participants noted that getting their information promptly on the Web is a top concern.

While website loading speed is integral for visitors, it has also gained significance with search engine rankings. This is especially the case with Google, which introduced a new search architecture earlier this year called Google Caffeine.

Okay, so we know faster is better. There are several website speed tests you can use to find out how fast your website loads, including the one on iWeb.

We benchmarked our site, Webcopyplus.com, against Google and did fairly well. Our home page took .42 seconds to load, versus Google, which is renowned for speed, and clocked in at .11 seconds. 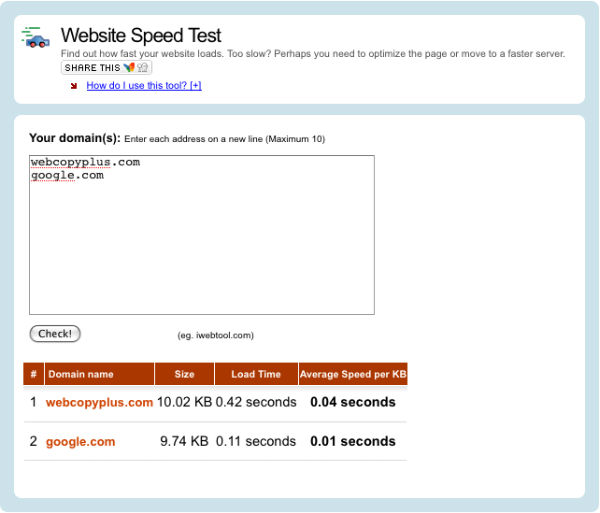 Take a moment to test your website speed. Is it too slow? Perhaps you need to optimize the page or move to a faster server. For more on website performance, check out an insightful article at Smashing Magazine, called Website Performance: What To Know and What You Can Do.

One response to “Website Users Still Have the Need for Speed”