THE POWER OF FEAR 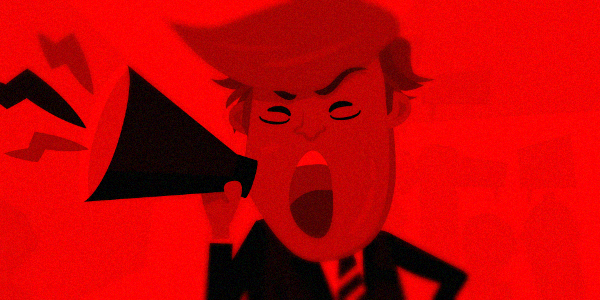 There are many things that motivate people, but the most powerful motivator of all is fear. Fear of crime, man-made disasters, change, the future, judgement, disease, failure, rejection — the list is endless. It’s evil and dark, but many use fear to dominate and control people. Just look at the campaign of US presidential candidate Donald Trump.

“The attacks on our police, and the terrorism in our cities, threaten our very way of life,” Trump announced at his acceptance speech at the Republican National Convention. Upon describing a dire view of catastrophic proportions, he stated: “I have a message for all of you…the crime and violence that today afflicts our nation will soon — and I mean very soon — come to an end. Beginning on January 20th of 2017, safety will be restored.” There’s manufactured fear, and a solution, in the form of ‘President Trump’.

Other supporters are following suit. Former New York Mayor Rudy Giuliani talked about “the terrorists who are killing us and our allies,” and then concluded: “There is no next election. …There’s no more time for us left to revive our great country.” And there’s reinforcement and urgency.

Trump has deliberately tapped into Americans’ anxieties, gaining more delegate votes than any other candidate in Republican history as he handily beat out 17 other Republican candidates. Meanwhile, in the latest polls, he’s just a few percentage points behind Democratic presidential nominee Hillary Clinton.

While talk of doom and gloom is rampant on the campaign trail, statistics show Americans are much less likely to be victims of domestic or international terrorism than most Europeans and citizens of Middle East nations. According FBI reports, violent crime in the U.S. has dropped steadily since 1992. Meanwhile, the U.S. continues to outperform most of the world’s advanced economies, and unemployment has dipped to its lowest rate since November 2007.

So, while fear-provoking speeches and debates are pushing the spotlight on issues like terrorism, the fact is a lot more Americans are harmed and killed by many other causes, as illustrated in the following infographic.

Many politicians, like marketers, use fear as a motivator as often as they can. The basic formula: present a scenario to invoke a strong sense of fear, and then reveal a solution. The solution — which can come in the form of a product, service or plan — promises to bring us back to safety.

Fortunately, as seasoned web copywriters, we know there are many other ways to motivate beyond fear, including positive emotions. Marketers, entrepreneurs and leaders alike can strive to inspire, rather than resort to fear.

As for Trump, many people — including several Republicans — just hope his scare tactics are not powerful enough to put him in the White House.

One response to “THE POWER OF FEAR”