WHAT’S THE LINK BETWEEN COFFEE AND CREATIVITY? 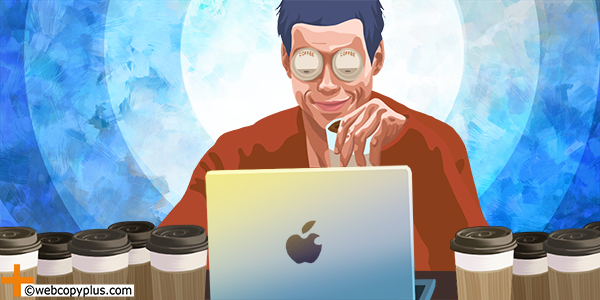 How do you take your coffee? At Webcopy+, our web copywriters ingest coffee intravenously — but jokes (mostly) aside, what’s the link between coffee and creativity? More specifically, what’s the scientific correlation between caffeine and cognitive function associated with creativity?

It’s tantalizing: Caffeine as a completely legal, widely available, affordable, (relatively) safe drug you can take, any time you need a creative boost. There are plenty of ways this can go down — cola, tea, energy drinks, chocolate — but for many creatives, coffee is their jam.

We won’t get into how caffeine generally does what it does (though if you’re curious, check out how here), but whether it’s a cup or five a day, there’s plenty of anecdotal documentation over literally centuries supporting coffee’s “boosting” power: An article in The New Yorker cites 19th century French novelist and playwright Balzac as crediting a daily habit of eating pulverized coffee beans on an empty stomach, with fueling both an intense creativity and prolific output.

But there’s a catch: The same article also refers to other studies that seem to show caffeine’s pluses aren’t without plenty of potential minuses.

However, other recent discoveries in neuroscience suggest that when we’re wired on caffeine and intensely focused on a project, we are much less able to link abstract ideas.

Detailed MRI studies of people’s brain activity show that the “left brain, right brain” theory of how rational and creative thinking works, is far from accurate; we actually use different “networks” incorporating multiple parts of our brains — an “executive attention network” (including the frontal lobe) that activates when we pay attention, plan, and make decisions, versus an “imagination network” associated with divergent thinking: Daydreaming, free association, and exploring ideas. Significantly, areas of the brain associated with the executive attention network — such as the frontal lobe — were often inactive when the imagination network was active.

An Inc. article about increasing creativity suggests “if we stop drinking coffee, we let our mind drift. We may daydream. And that’s when we are creative.”

Basically, caffeine works best for the executive attention network by sharpening our attentiveness and reasoning, but at the expense of the imagination network’s free association: Caffeine is great for focus but not so hot for brainstorming. Yeah, we agree — that kind of sucks.

The need for a creative boost is definitely not the only reason people crave coffee, or love cafés. Inquiring minds want to know: Are there ways to keep the creative juices flowing, without kicking the coffee habit? Turns out there are.

You guessed this already, but now there’s scientific evidence supporting your gut feeling that the moderate background noise level of many café environments is conducive to creative thinking.

Got a great idea but can’t keep your energy up? Take a coffee nap to combine the alertness benefits of a 20-minute nap, and the memory-enhancing effect of caffeine.

Most interestingly, a combination of alcohol and caffeine could be the ultimate combo move for creativity and focus. Of course, if you’re the kind of person who gets your best ideas after a couple of drinks — then executes those ideas best over several cups of coffee, you might be genius. Either way, best to run this one by HR.

That’s the latest buzz: Caffeine won’t directly enhance your creativity, but it can enhance the conditions where creativity tends to flourish.

What’s the daily caffeine tipping point, a.k.a. how much, is too much? The most recent research suggests up to 400 milligrams of caffeine daily would be considered safe for healthy adults – that’s approximately four cups of brewed coffee, 10 cans of cola, or two energy drinks. Sounds good to us.

So, we’re back to our original question: How do you take your coffee to enhance either focus or creativity — or both? If you’re short on Baileys Irish Cream, here are some others ways to unleash your creativity. Also, feel free to contact our content writers and strategists for your next intense exercise in divergent thinking. Coffee’s on us!