The Evolution of Language on the Web

If English weren’t an evolving language, we’d still be satisfying our retail needs at ‘Ye Olde Shoppes’ and referring to our less intelligent peers as ‘unpregnant’.  Many factors contribute to the evolution of language, including geography, culture, and technology — but what determines the changes that are deemed acceptable enough for purists to relent?

Of course, now we realize the absurdity of the extra vowels in older forms of English, but at one point they were likely deemed essential.  What was the breaking point?  Continuing in this tradition, albeit a hyper-charged version fueled by rapidly advancing digital technology, will we eventually see the disappearance of vowels altogether? OMG!

Perhaps that conclusion is overly dramatic, but as a defender of quality content, I’m conflicted.  On the one hand, I’m in support of concise written communication, especially where web marketing is concerned. But, on the other, I might spontaneously combust if ‘BTW’ and ‘IDK’ were to permanently replace the phrases ‘by the way’ and ‘I don’t know’.  To ease my mind, I decided to consult some peers.

How the Internet Is Changing Language

Historically, language has evolved through the spreading of memes, or those copied methods of communication that become widely accepted and used.  Does the rate at which memes spread via the Internet mean that we’ll have to get used to a more rapidly changing language? 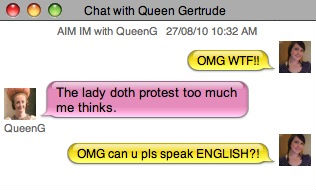 David Crystal, Professor of Linguistics at the University of Wales, Bangor, thinks the Internet is the greatest thing to happen to the development of the English language since the invention of the printing press. He believes new technology leads to new stylistic forms and increases the expressive range of language, especially at the informal end of the spectrum.

In fact, he told the American Association for the Advancement of Science:

“The prophets of doom emerge every time a new technology influences language, of course — they gathered when printing was introduced, in the 15th century, as well as when the telephone was introduced in the 19th, and when broadcasting came along in the 20th; and they gathered again when it was noticed that Internet writing broke several of the rules of formal standard English — in such areas as punctuation, capitalization, and spelling.

“All that has happened, in fact, is that the language’s resources for the expression of informality in writing have hugely increased — something which has not been seen in English since the Middle Ages, and which was largely lost when Standard English came to be established in the 18th century.

“Rather than condemning it, therefore, we should be exulting in the fact that the Internet is allowing us to once more explore the power of the written language in a creative way.”

He added, educationalists will continue to be responsible for teaching children which style of language is appropriate in certain situations.

This Person Has Protected Their Tweets

My brainy buddy Mignon Fogarty, also known as Grammar Girl, author of Grammar Girl’s Quick and Dirty Tips for Better Writing, had this to say on the matter:

“When websites used by millions of people make menu or user-interface decisions on the leading edge of what the language ‘old guard’ consider standard, it can speed up the acceptance of the new forms. People may have been fighting about whether ‘they’ can be singular for as long as we remember, but when Facebook and Twitter integrate a singular ’they’ into their sites [This person has protected their tweets], it quickly gains a deeper hold in the public consciousness.”

Fogarty also notes that when Hotmail and Gmail began using the word ‘email’ without a hyphen, which many would consider liberal, since several official style manuals still call for ‘e-mail’, people began to accept the former as correct.  Now, she says, they’ve started using ‘mail’, opting to remove the ‘e’ altogether.

An Existential Crisis for a Superhero

This all leaves me wondering whether I should continue fighting for proper language use in web content since English seems to take on a life of its own online. Is it worth my while to defend something that will likely continue to change at a faster and faster rate?

I’d like to hear your thoughts on the matter before I contemplate abandoning my mission in favour of fighting for ideals that stand the test of time, like justice, perhaps. 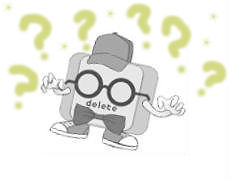 3 responses to “The Evolution of Language on the Web”